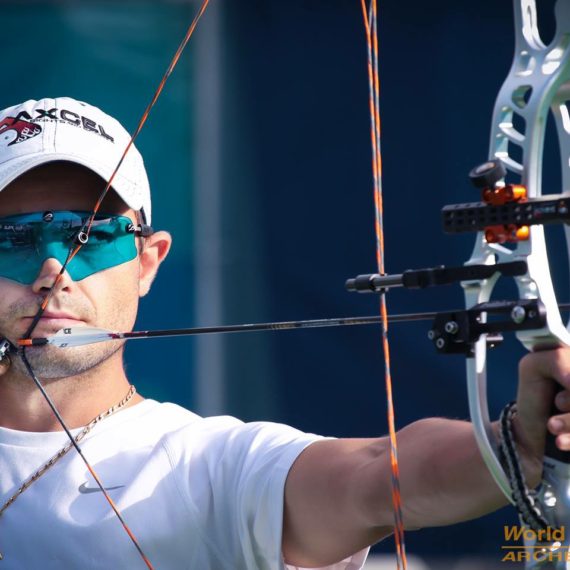 I began archery in 1994 with a recurve and some national medals with it, in 2003 I decided to switch compound and had some good results quickly. After 6 months with my compound I had my first nationals selection for the European indoor champ in 2004 in Sassari. After 13 years in compound with the help of all my sponsors I stopped working and became a full time pro shooter in March 2016. Bow: Hoyt Podium X 40" Cams: Spiral pro side 1D Amo Draw length: 27” Poundage: 59lbs indoor & outdoor Arrow rest: I shoot an AAE Freakshow rest extended with the Freakshow blade 0.10 in outdoor and the standard blade 0.10 in indoor. Indoor arrows: Carbon Express X-Buster's 350 29,5" with 160grn point. Socx wraps and AAE max stealth vanes 3". Beiter nocks 23.08-8H. Outdoor arrows: Carbon Express Nano Pro's 450 28,25" with 120grn tungsten point. Socx wraps, AAE 2" PM vanes and beiter hunter pin nock #2 Release aid: I use a TRUball HT Pro back tension and an Abyss Stabilizer Set-up: I use an AAE Hot Rodz Nitrous Stabilizer 27" with a Gripper 10 degrees quick disconnect. Two 15" side Rodz with a gripper double v-bar. I'm running 8oz on the stabilizer, 8oz on the left side Rodz and 10oz on the right side Rodz Bowsight: Axcel Achieve CXL with an Axcel X-31 scope with Feather vision Verde Plus lens 0.80 power ProStops of Choice: I'm using the same ProStops for indoor and outdoor. The ProStops HCS - 6mm. This on give me the right holding weight I want both indoor and outdoor and a great and strong back wall.

“If you want to use the very best stops on the archery market, try the Pro-Stops products and you will NEVER change!!!”